Tried paddling with two of the wains a couple of weeks ago, them using a split kayak paddle so they could pretend to be doing something useful. 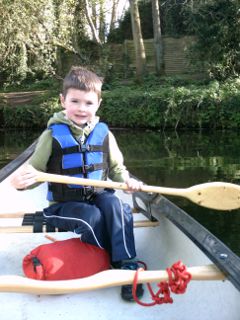 The seven year old was actually able to paddle the 16' canoe with the four of us in it - all I had to do was sit in the back and steer.   I thought "I'm onto something here" - it's time to get proper kids paddles.

Have you ever tried to buy a kids canoe paddle?  they're about £30!  nearly as much as  proper full size ones!

I found a couple on ebay.  They were Collect in Person from England, but I stuck in a fiver anyway to see what they went for.

Oops, Now I had to find a way of getting them picked up.
Eventually DHL agreed to do it for £13, and they arrived a few days later.

total cost - £18 for two hand made paddles.  They weren't exactly Grey Owl, but they look great and the kids love them.

There's obviously demand - everybody we met was asking where they came from.

Saturday morning we portaged down to the lower side of the lock, and set off.  Evan and I got in early and played briefly in the moving water below the traps before heading off down river.  We rested in the boats going through the lock at movanagher, and stopped a few times at some of the many canoe steps along the river.  Coming up to Agivey Bridge, the weather was miserable, and it's a dreary paddle at that stage anyway, so we stopped for 20 minutes for a break.  that was miserable too.  I tried boiling the Kelly Kettle and making couscous curry, but didn't cook it for long enough.  ugh.  Chocolate saved the day though.
back in the boats we paddled to Drumaheglis.  At £16.50 per tent, per night, (and remember most of our lads were in 1 or 2-man tents), it was a huge expense, but the hot showers and other facilities were most welcome.

I left the group after they had set up camp for the night.  Next day they paddled to Coleraine Marina for the get-out, including rafting up and running the rapids into Coleraine.
Posted by Orintex at 1:25 PM No comments:

The BB trip down the Bann was a great success.
It was windy, so instead of starting in Antrim and paddling across the North Shore of Lough Neagh the decision was made to start in Toome.  In one way I was disappointed because I've never paddled the whole way before, but it would have been a bit of a hairy ride.  There's places along that north shore where even in a canoe it's too shallow to paddle less than a mile out.  That means you're exposed, and it means the waves are big and close together.  Fun, but not with 20 inexperienced paddlers in tow.

So, with two paddlers much less experienced than the others, Evan and I split up and took one each just before we entered Lough Beg.  I had Ian, who is a rugby player.  That means he's ... larger than me.  and with the wind coming from the west across the lough, we were weathervaning the whole way.

As Ian gained confidence and his technique improved, we were able to keep up with the rest of the group, and with both of us paddling on the windward side of the boat to counter the wind, we were able to work our way to the front.  As we paddled through the group I was pointing out the techniques of the other paddlers to Ian, so when we got to Newferry he was ready to try steering.

I didn't say too much, just kept a steady pace and encouraged him to feel what body, boat and paddle were doing.  He'd absorbed the earlier instruction, and before long was steering the boat with confidence.

first night we camped at Portna lock where there is a sheltered grassy area, toilets and a tap.

Posted by Orintex at 1:08 PM No comments: 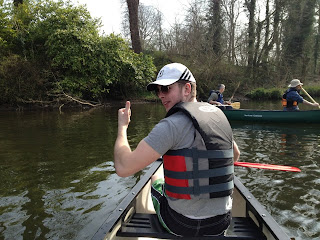 The local Boys' Brigade company are paddling on the Shannon this year for their Duke of Edinburgh Gold award.  They asked me if I'd help out, so I was able to join them for a training session on the Sixmilewater.

Ricky from EyeFeelGood is running their training, and we had a great afternoon working on their understanding of how the wind and weight distribution affects the boat, and racing each other in every conceivable direction.(forwards, sideways, backwards, fastest to stop...)

The Practice weekend is 6th-8th April, starting in Antrim, paddling across the north shore of the lough and heading up the Bann to Coleraine.  Friday night we're stopping at Newferry, Saturday night at Movanagher.  I'm leaving them on Saturday evening because I've got stuff to do on Sunday morning.
I know there's a shortage of decent places to camp at the North end of the Bann, but I think we'll be finished very early on Saturday - which leaves a long journey on Sunday.  they're planning to leave by 5am.  yeah, right.
Posted by Orintex at 6:35 PM No comments:

Final X-Ray, the break is invisible. I got the All Clear!
Posted by Orintex at 2:56 PM No comments:

Barry Edwards (aka Boatropes) has a good reputation on the Song of the Paddle forum. I've bought throw bags from him in the past and they're as good as any of the commercial ones (actually better than most), but what makes him stand out is the customer service.

I wasn't sure what sort of rope to get for the painters and leashes on our new boat. I just asked Barry and he came straight back with:

So they're winging their way to me right now - and by previous experience, I won't be surprised if they arrive tomorrow morning.


That price is good as well, which always helps!
Posted by Orintex at 12:41 PM No comments:

I bought half a canoe!

Somebody posted on the NI-Wild website that Mobile Team Adventure were selling off their old canoes.

I told Evan, in case he knew anybody who was interested. Before I knew it we'd decided to try and buy one of them between us.

I was at a birthday party on the day of the sale, but Evan headed down and we got a year old 16' venture ranger. It's in nearly perfect condition, hardly used.
Posted by Orintex at 12:34 PM No comments:

Yet another x-ray. One month on, and Mr. Swain described my range of movement as 'remarkable'
I thought the break on the x-ray looked as bad as ever, but he pointed out the grid-like pattern that apparently shows it's healing well. Back in two months for what will hopefully be my last appointment.

In the meantime, I've been given permission to resume normal activity, working up to riding the mountain bike.
Posted by Orintex at 3:15 PM No comments:

Got the cast off today. In my growing experience of broken arms and casts, this is the scariest time. When the pain goes you get used to wearing a cast. Bumping into things isn't a problem. Mine even occasionally got used as a tool for banging things.
now all that protection's gone and I feel very vulnerable.
I've got a big scar healing, and a wrist joint that's painful to move... A small part of me wants it back inside my protective shell.

No physio this time - I know the routine; so down to work getting everything loosened up. I even started the basic exercises while waiting for the x-ray to develop.
Posted by Orintex at 11:18 AM No comments:

Got the cast changed to a red one that stops below my elbow. The elbow's very stiff, but nice to be able to stretch again. The nurse who was putting it on was about to cover my thumb with the new cast, but I stopped her just in time.
Now it goes a little bit up the thumb and partly covers my fingers too. If anything it's more restrictive than the long one - at least I could use my hand with the purple one.

On the bright side, helicopter heroes is on BBC1 every morning!
Posted by Orintex at 9:44 AM No comments:

Wandering aimlessly in Junction One, the local outlet centre, I came across Lough Neagh Rescue fundraising. They're also looking for new crew members to get a new station set up in Antrim.

Maybe because I've always wanted to, or maybe because my life is pretty boring at the minute, I put my name down.

It doesn't exactly fit into the 'mild excitement' mould, so i've started a separate blog for my adventures with the life boat.
Posted by Orintex at 9:38 AM No comments:

a change of scenery 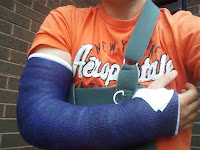 back to the clinic for an X-ray and a change of cast.
From the white plaster back slab "sugar tong" splint to a very fetching purple one (why did I let them persuade me to use purple?) which goes all the way up past my elbow.
Posted by Orintex at 9:34 PM No comments:

We finally concluded that the bone - if it's healing at all - is healing far too slowly, and it'd be quicker to try again.

Surgery today to take a bone graft from my hip, re-break my ulna and stick it back together again with a bigger plate.

Apparently I won't be having much excitement of the mild variety for a while.
Posted by Orintex at 9:28 AM No comments:

they're a mad bunch 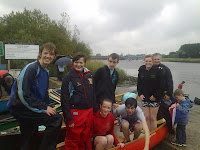 Had a great weekend with the YF. We divided into two groups and the whole weekend had to get photographs of the group doing different things: 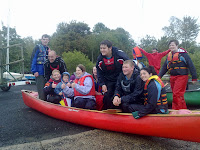 standing beside a yellow car,
standing with a sculpture,
making a human pyramid,
with a stranger holding a sign,
with a cow,
in a canoe... 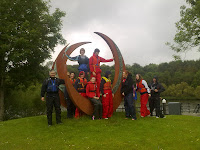 They got so into it they started making up extra rules in the hopes of getting extra points.

We'd a great afternoon with the legend that is Robin Ruddock, paddling along the Bann. Carys insisted on jumping in of course.

I left my other camera in the car, so there aren't any photos on the water.

When I was a youngster there wasn't much opportunity to get involved in outdoor activities. So now I'm running the church youth group I'm trying to make sure they won't be able to say the same thing when they get older.

It's the YF weekend this weekend. the main point of the weekend is to answer their questions about Christianity, but every year we organise something energetic for the Saturday afternoon.

Last year we had a surfing lesson from Troggs surf school

the year before Paul Blanchard took us on the High Ropes course at Busmills education centre.

This year I tried to arrange for Ben Ruddock to take us mountain biking, but that didn't work out. Instead, we're going canoeing on the Bann with Ben's dad, Robin.
I think he's planning to take us from the Cutts to Coleraine Marina.
If I'm not careful I'll have done the whole route in sections before Martin even gets here!
Posted by Orintex at 11:06 AM No comments: